Yay,  another mini-project with the ATtiny10!

A while ago I devised a scheme to drive an electronic dice with only two IO lines. I finally found the time and motivation to build up a small design using this as an entry for the hackaday 1k compo. Please find project details on the hackaday.io page or the github repository. 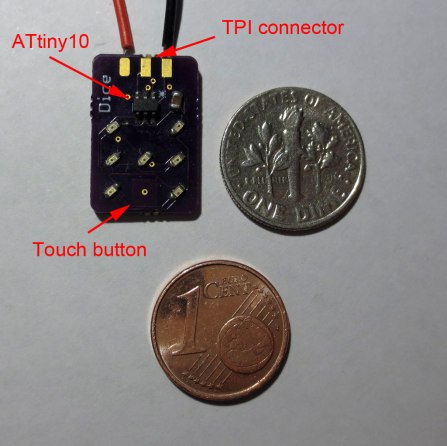 The ATtiny102 and ATtiny104 are Atmels newest addition to the AVR ATtiny family. They are a bit different to most of the other devices in that family, since they are based on the AVRTINY CPU core, which was so far only used in the ATtiny4/5/9/10/20/40. I have previously done several projects on the ATtiny10, so I was naturally excited to see another addition to this family. Both new devices are clearly targeted at the lower end, with only 1kb of flash.

Two interesting new features compared to the ATtiny10 are self-programming capability and an integrated UART. Naturally, this asks for a serial bootloader. Since no bootloader is available for this device I set out to work to work on one.

The current state can be found at the Github repository linked below.

Right now it is able to upload and execute user programs on ATtiny104 and ATtiny85, but it is far from being optimized. I stopped working in Gluon for various reasons, but may be picking it up again at some point.

During the last months, a new WS2812 alternative appeared on the market: The SK6812. I finally managed to get my hands on some of them to take a closer look. In most aspects these devices are basically clones of the WS2812. What is interesting however, is that the manufacturer came up with a couple of new variations of the stock 5050 RGB LED.

As with many components from mainland china, it seems very difficult to identify the actual manufacturer of these devices, as vendors tend to rebrand data sheets. It appears that at least one of the original manufacturers is Opsco Optoelectronics. However, it is likely that there is more than one manufacturer is using the SK6812 brand, which does possibly only refer to the controller chip itself. The “SK” prefix, on the other hand, is normally used by Shenzhen Sikewei Electronics, which seems to specialize on speech ICs and similar low-cost applications. Are they connected? No idea…

END_OF_DOCUMENT_TOKEN_TO_BE_REPLACED

Two years ago, I spent some time analyzing the algorithm used in a candle flicker LED as  commonly found in cheap artificial candles. I reverse engineered the  algorithm from the flickering pattern and recreated the algorithm in software. Turns out this is of interest for many people who are searching for artificial candle algorithms – there is a surge of traffic every year around December. However, I just reverse engineered one of the controller ICs – this does not mean that this is a good approximation of a real candle.

But how to get there? First, we need to understand how a real candle behaves. In a recent comment, Gary made the excellent suggestion to record a real candle on video and analyze the data. I noticed something similar could be done in a very quick-and-dirty way, by connecting a photodiode to a digital storage oscilloscope.

END_OF_DOCUMENT_TOKEN_TO_BE_REPLACED

I recently bought a very low cost electronic dice kit on an impulse. Assembling it was good retro-fun for a while. The circuit design is was purely 70ies style: A CD4017, a NE555 and a couple of transistors. Of course, this got me thinking: How would it be done today in a most efficient way? Of course this means using a microcontroller, and, of course this means using as few resources as possible. Will an ATiny10 with 3 I/Os pins do?

END_OF_DOCUMENT_TOKEN_TO_BE_REPLACED

A couple of weeks ago I reported about a new type of RGB-LED with integrated controller, the APA102. One of the interesting new features of this device is a two-wire SPI interface instead of the proprietary one-wire protocol of the more common WS2812. Many microcontrollers have hardware SPI functions, which allow easy control of these LEDs, as opposed to timing critical bit banging. But it turned out this was not the end of the story. As pointed out by Bernd in a comment, there is some discrepancy between the datasheet and the actual behavior of the devices when it comes to the “end frame”. Reason enough to subject the APA102 to more scrutiny.

The diagram below summarizes the APA102 protocol as found in the data sheet.

END_OF_DOCUMENT_TOKEN_TO_BE_REPLACED

Recently, I encountered an interesting problem: How do you measure the length of a WS2812 programmable RGB-LED string electronically? That is, just using signals that are already there. This can be useful if you want a LED controller to adapt its pattern according to the string that is connected to it, or simply for diagnostic reasons.

WS2812 strings are usually controlled by using one serial output signal only. The LEDs are daisy chained and you simply push out data for all LEDs without any feedback. If there are fewer LEDs on the string, the data for the last LEDs is ignored.

An intuitive approach to counting the number of LEDs is to feed the output of the last LED of the string back into the microcontroller. According to the WS2812 protocol, the output of LED number n is low until data for n+1 LEDs has been pushed to the string. To count the number of LEDs, data is fed to the string until a rising transition is detected on the output. A relatively easy way to implement this is by using a pin change interrupt on the AVR, or a similar feature on other microcontrollers.

While this works nicely, it has the disadvantage of requiring another wire. Can we do it without introducing any additional connections? END_OF_DOCUMENT_TOKEN_TO_BE_REPLACED

END_OF_DOCUMENT_TOKEN_TO_BE_REPLACED

The WS2812 RGB LEDs with integrated controller are fairly successful devices that come in a variety of packages. Recently, similar devices by other manufacturers started to appear.

I managed to get my hands on a few samples of LEDs with PD9823 controller, courtesy of Soldering Sunday, and was able to subject them to more scrutiny. The manufacturer of the IC seems to be “BaiCheng”. You can find it in several LEDs with different package types. There is a single page “datasheet”, linked here, but little else is known to me.

The given timing values are, again, completely different from any other device. So are these really compatible to the WS2812? Only one way to find out: I used the same setup to extract the timing as described earlier for the WS2812. You can find the results below.

END_OF_DOCUMENT_TOKEN_TO_BE_REPLACED

Recently, Olimex anncounced the Olimexino 85s, claimed to be the “World’s smallest Arduino ever“. Now, that looks like a challenge. I guess it is about time to show off what has been on my desk since some time last year: The Nanite, pictured below.