As should be obvious from this blog, I am somewhat drawn to clever and minimalistic implementations of consumer electronics. Sometimes quite a bit of ingeniosity is going into making something “cheap”. The festive season is a boon to that, as we are bestowed with the latest innovation in animated RGB Christmas lights. I was obviously intrigued, when I learned from a comment on GitHub about a new type of RGB light chain that was controlled using only the power lines. I managed to score a similar product to analyze it.

END_OF_DOCUMENT_TOKEN_TO_BE_REPLACED

Sometimes you find things you have not even been looking for…

A chaotic oscillator is an electronic circuit that can exhibit “chaotic“, nonperiodic behavior. A commonly cited example is Chua’s circuit, but there are many others. I always regarded these as carefully designed, rather academic, examples. So I was a bit surprised to observe apparently chaotic behavior in a completely unrelated experiment.

END_OF_DOCUMENT_TOKEN_TO_BE_REPLACED

I recently bought a very low cost electronic dice kit on an impulse. Assembling it was good retro-fun for a while. The circuit design is was purely 70ies style: A CD4017, a NE555 and a couple of transistors. Of course, this got me thinking: How would it be done today in a most efficient way? Of course this means using a microcontroller, and, of course this means using as few resources as possible. Will an ATiny10 with 3 I/Os pins do?

END_OF_DOCUMENT_TOKEN_TO_BE_REPLACED

A couple of weeks ago I reported about a new type of RGB-LED with integrated controller, the APA102. One of the interesting new features of this device is a two-wire SPI interface instead of the proprietary one-wire protocol of the more common WS2812. Many microcontrollers have hardware SPI functions, which allow easy control of these LEDs, as opposed to timing critical bit banging. But it turned out this was not the end of the story. As pointed out by Bernd in a comment, there is some discrepancy between the datasheet and the actual behavior of the devices when it comes to the “end frame”. Reason enough to subject the APA102 to more scrutiny.

The diagram below summarizes the APA102 protocol as found in the data sheet.

END_OF_DOCUMENT_TOKEN_TO_BE_REPLACED

The WS2812 RGB LEDs with integrated controller are fairly successful devices that come in a variety of packages. Recently, similar devices by other manufacturers started to appear.

I managed to get my hands on a few samples of LEDs with PD9823 controller, courtesy of Soldering Sunday, and was able to subject them to more scrutiny. The manufacturer of the IC seems to be “BaiCheng”. You can find it in several LEDs with different package types. There is a single page “datasheet”, linked here, but little else is known to me.

The given timing values are, again, completely different from any other device. So are these really compatible to the WS2812? Only one way to find out: I used the same setup to extract the timing as described earlier for the WS2812. You can find the results below.

END_OF_DOCUMENT_TOKEN_TO_BE_REPLACED

Atmels AVR ATtiny10 are surprisingly powerful devices that come in an extremely tiny SOT23 package with only 6 pins. The have 1kb of flash, 32 bytes of SRAM and use the reduced AVR core which only supports 16 instead of 32 register. It seems like Atmels idea of these devices is to use them as an advanced blinker, and to replace tiny logic circuits. But other people have shown that much more is possible. For example the noiseplug (video), a chiptune player, and a Simon Says game.

I previously used the ATtiny10 in the TinyTouchbutton, a touchbutton controlled light with WS2812 LEDs. This time I aimed higher: Is it possible to turn the ATtiny10 into a USB compatible device? My goal was to implement a subset of the little-wire functionality to control a WS2812 LED by USB. This takes 3 I/O lines, which is exactly the number of free pins on the ATtiny10.

Littlewire supports several functions to control WS2812 LEDs on arbitrary I/O ports. I simplified this to only supporting a single LED on a specific pin, however still retained protocol compatibility. This means that all the little-wire host-programs still work. The finished device can, for example, be used as an RGB indicator LED similar to the Blink(1).

My test setup is shown below. The ATtiny10 is almost the smallest part of the circuit. There are some discrete components on the rear-side of all PCBs, so do not be surprised about missing decoupling capacitors, zener diodes and resistors.

END_OF_DOCUMENT_TOKEN_TO_BE_REPLACED

I previously reported on reverse engineering a candle flicker LED. My approach was to extract the “flicker” pattern from the input current variation and to deduce the algorithm from statistical analysis.

Of course there is another, more involved, approach. And that is to reverse engineer the circuit directly from the die. Andrew Zonenberg from Siliconpr0n decapsulated and imaged the controller chip from one of my LEDs. You can find his report here.

He managed to obtain very high-resolution optical microscopy images of the top-level metal. It turns out that the controller chip is manufactured in a relatively coarse CMOS process with one metal layer and 1-2 µm resolution. This is 1980ies technology. But of course, that is all that is needed for a circuit as simple as a flicker-LED. 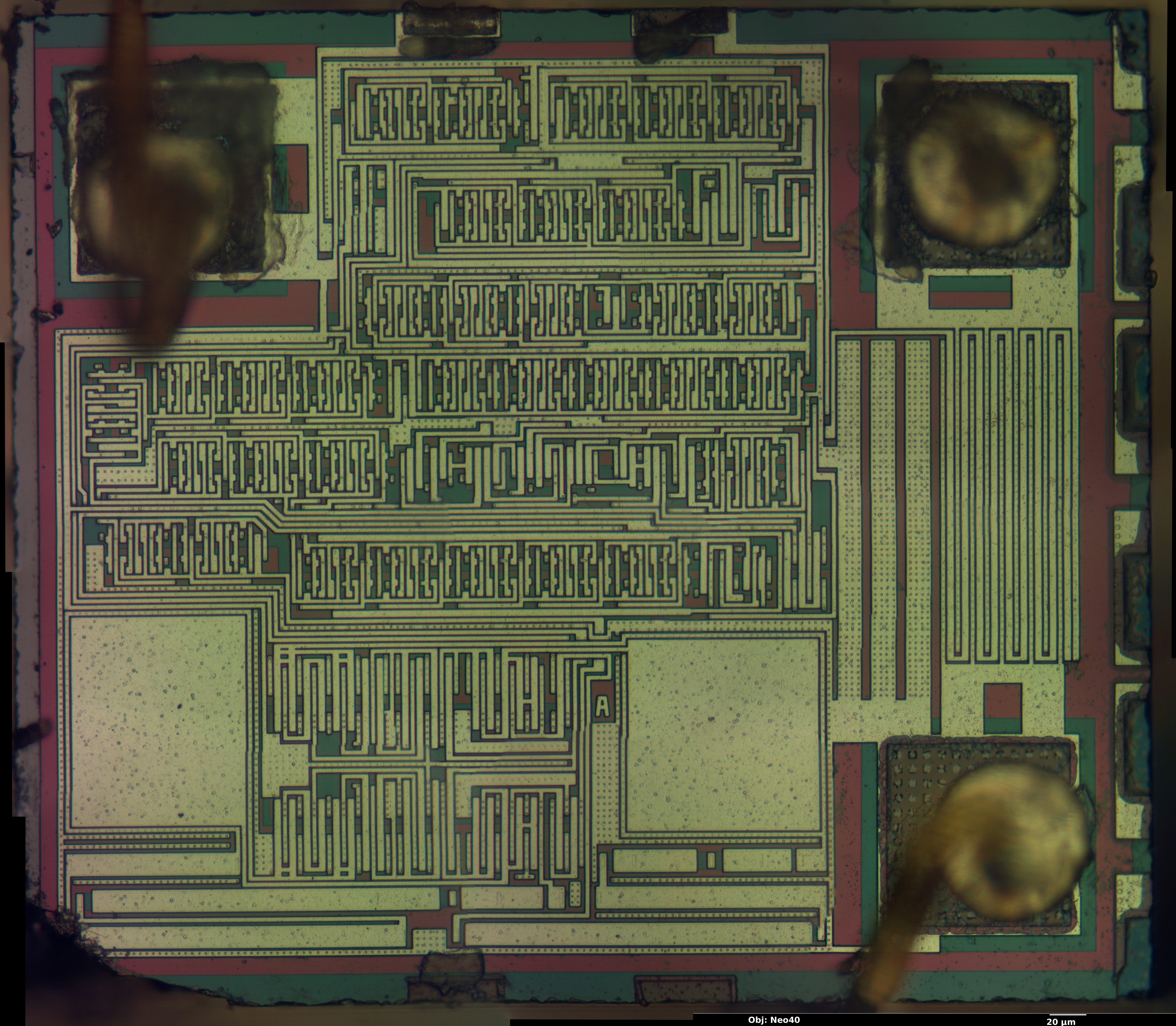 END_OF_DOCUMENT_TOKEN_TO_BE_REPLACED

There is a new addition to the popular WS2812 family of RGB LEDs with integrated controller: A 8mm through hole version. Right now they seem to be in pilot production stage. The only place that has them is Soldering Sunday where they are called PixelBits. My understanding is that they will also be available at the usual sources later this year. I got a couple of them to test for compatibility with my light_ws2812 library.

What’s pretty cool about these LEDs is that they are diffuse – no more blinding unidirectional light. This might be very useful for indicator lights. Furthermore, you can easily wire them freeform without a pcb. I see a lot of RGB LED cubes coming up…

END_OF_DOCUMENT_TOKEN_TO_BE_REPLACED

WS2812 LEDs are amazing devices – they combine a programmable constant current controller chip with a RGB LED in a single package.  Each LED has one data input and one data output pin. By connecting the data output pin to the data input pin of the next device, it is possible to daisy chain the LEDs to theoretically arbitrary length.

Unfortunately, the single-line serial protocol is not supported by standard microcontroller periphery. It has to be emulated by re-purposing suitable hardware or by software timed I/O toggling, also known as bit-banging. Bit-banging is the preferred approach on 8 bit microcontrollers. However,  this is especially challenging with low clock rates due to the relatively high data rate of the protocol. In addition, there are many different revisions of data sheets with conflicting information about the protocol timing. My contribution to this was the light_ws2812 library V1.0 for AVR and Cortex-M0, which was published a while ago. A V2.0 rewrite of the lib was in order due to various reasons. And, to do it right, I decided to reverse engineer and understand the WS2812 LED protocol to make sure the lib works on all devices.